Ottoman Talismanic Shirts and the Yantras of Vedic Astrology

Up to now I have conducted many studies. The importance that the Ottoman Sultans placed on astrology and my research into and admiration for the Münecimbashi system of astrology that went on from the 14th century up to the late 18th century drew my attention to the comparative correlation between Ottoman Talismanic Shirts and the Yantras of Vedic Astrology of which I was a student. In this Turkish-Islamic system, symbols derived from numerological calculations based the ABCED system of alphabetic numeration (Gematria) are used with a similar approach to the Yantras. It is an application that utilizes symbols that are meant to counter negative planetary energies that repeatedly project the same circumstances in our lives due to challenging and obstructing configurations in our birth chart.

At a critical stage in my research, I realized that the same method of calculation was used in constructing both the Talismanic Shirts and the Yantras, and I started to examine the Talismanic Shirts in greater detail. The Talismanic Shirts that I had the chance to examine at the Topkapi Palace Museum, as well as the research book by Art Historian Asst. Prof. Hülya Tezcan on Talismanic Shirts, among other sources led me to important discoveries. When I learned that the Talismanic Shirts prepared by the astrologers (Muneceimbashi) of the Ottoman Sultans was prepared according to a tradition that when back to 2852 B.C., things began to get even more interesting. The earliest known Yantra was prepared as lines carved on rock and bronze by the Chinese Emperor Fu His in the form of Pa Kua 8 trigrams. When these pass through each other they make up the foundations of the magical power that provides protection against the positive forces of nature. It has been established by research that even before they converted to Islam, the Turks made use of Talismanic Shirts. The ancient Dede Korkut stories speak of protective shirts that are immune to lead and sword cuts or confer happiness. In ayah (verse) 93 of the 12th chapter, the Yusuf (Joseph) Sura, of the Koran Talismanic Shirts are mentioned. In the period of time when the prophet Joseph is Vizier of Egypt, there is a shirt that his fathers and brothers send him as a present. It mentions in ayah (verse) 96 of the 12th chapter of the Koran that when the prophet Joseph rubbed this shirt on his face the weeping of prolonged separation stopped and he opened his eyes. My conclusion from all this is that during the period of Turkish domination in India, this special teaching was developed as Hindu-Islamic cultural product and carried on to the Ottoman period to become part of the administration of the state. The four archangels, Michael, Gabriel, Rafael and Azrael, the 99 names of Allah (ʾasmāʾ allāh al-ḥusnā), and certain ayahs from the Koran frequently make their presence on these shirts. In addition, the phase of the moon, the astrologically propitious time and many other astrological symbols are frequently used on these shirts prepared according to the date and time of birth of the Sultan in question. Dear reader, my studies on this matter continue and I will deal with it in detail in my forthcoming 2nd book.

Example of a Yantra

This one of the Talismanic Shirt was worn by the Ottoman Sultan, Suleiman the Magnificent under his armor at the Mohacs Battle and many other military confrontations. It was prepared by the head (or court) astrologer (Münecimbashi) according to his time of birth and contains the Al-Fath (Victory) Sura and other Suras of the Koran. 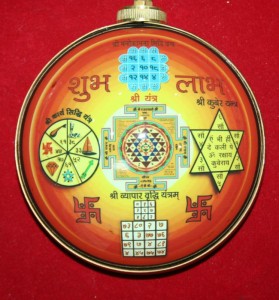