The Sabians of Harran

This Article was written for and published in the bilingual Turkish magazine Consensus. 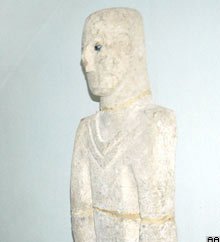 When we mention Anatolian civilizations very few of us think of Harran. The city of Harran is virtually a forgotten spot in the geography of Anatolia. Whereas in reality, it is a place of great importance having a very significant role in the development of civilization. It may surprise you to know that a 11,500-year-old temple was discovered in Göbeklitepe, and a 13,500-year-old statue, the world’s oldest, was discovered during an excavation in Balıklıgöl. Assistant Professor A. Cihat Kürkçüoglu of Harran University claims that the history of civilization began in the Urfa (a city just 45 kilometers from Harran). When we consider that civilization began in Egypt in Mesopotamia roughly 5,000 years ago we can have an idea on how these archeological finds have rocked the foundations of our understanding of history.

The city of Harran was believed to have been founded in 2000 B.C. as a merchant outpost of Ur. The name "Harran-U" means "caravan" or "crossroad" in Sumerian and Akkadian. The Bible records that Abraham stayed in Harran after leaving Ur, which some claim was actually Urfa. Though there are claims that Harran got its name from Haran the brother of Abraham. Other than the similarity of name this is not substantiated. Furthermore, we learn that Terah, the father of Abraham and Haran died and was buried in Haran, and that a branch of the family remained there. Later Abraham sent a servant to Harran to obtain a wife for his son Isaac.

Though Harran, once a fabulous city, is now in ruins, we are told that not only was this city built over an area where the first world's cities with the first temples rose, and where agriculture was first started, but hosted perhaps the world's oldest university in the world. Many philosophers, scientists, such as Al-Battanai, who calculated the distance from the Earth to the Moon, Thabit ibn Qurrah, who translated Greek classics and scientific works into Arabic, and wrote on mathematics and astronomy, and the physicist and chemist Jabir ibn Hayyan to name just a few of the figures who rose to prominence in the Harran school.

Ruins of the Harran University destroyed in 1251

At a time when Christianity was rapidly spreading throughout the known world. Harran became the last pagan enclave, and as the the seats of learning in Alexandria fell in the wake of the new religion, and the Academies and schools of philosophy were closed down, philosophers sought refuge in Harran, where their books and teachings were preserved. Later many of them were translated into Arabic. Some by the so called "Sabians of Harran", ushering a golden age in the Islamic world. Later these works were to make their way into Europe, directly resulting in the Renaissance along with those works that were preserved in monasteries. Furthermore such underground movements as the Rosicrucians that fought for the reformation of state institutions, religion and science claimed their source of knowledge from the mysterious Damkar, believed to be a Sabian center of learning. The secular, democratic and humanistic principles of the modern world are due to such struggles which have taken centuries.

The first church and the first Mosque in Anatolia was built there, but the Harranians were famed as Sabians, "Star Worshippers." Both Jewish and Islamic sources claim that Abraham was himself a star worshiper, and there is a mutually story told that after contemplating the setting of Sun and the Moon, he came to the conclusion that there must be one God. There was a great temple dedicated to the moon god Sin at Harran, and it is claimed that Harran was one of seven cities each of which was dedicated to one of the seven planets. Such a system of astrolatry could be the oldest religion of man. Ancient structures like Stonehenge and the pyramids are known to be constructed on the basis of very fine astronomical calculations such planetary and stellar movements, seasons and eclipse. It is also the source for astrology which seeks to establish a unity between the greater phenomenon in the macrocosmos, and the lesser phenomenon in the microcosmos (man).

In 639 A.D. Harran came under Islamic rule The Caliph Marwan (744-750 AD) moved to Harran and brought the Umayyad Empire from Damascus to Harran. In 830 A.D. It is said that the Caliph al-Ma'mum while passing through Harran during an expedition to Byzantium, asked the Harranians what religion they belonged to. They said, "We are Harranians," and made it clear that they were neither Muslims, Christians or Jews, the Caliph said that was not good enough, they had to be either Muslims, Jews, Christians or Sabians, as only these are lawfully "People of the Book" according to the Koran. The Caliph continued on his journey and said they when he got back, they better convert to one these or it would be lawful to shed the blood of idolaters. After consultations the anxious Harranians were advised by someone clever to say "We are Sabians," and thereby the Pagan "Sabians" were able to continue their faith undisturbed until in 1251, when Harran was destroyed by a Mongol invasion.

The Harranian school drew from many resources, they had their roots in Chaldea and schools of the Magi; they harbored priceless Greek scrolls and which would have otherwise may have been lost. They were influenced by Judaism, Christianity and Islam. They revered Hermes Trismegistus as theri prophet and the Corpus Hermeticum as their holy book. Hermes Trismegistus was believed to be an ancient great Egyptain sage, perhaps Imhotep, who as the founder of writing and the author of many books on science, medicine, theology, ethics, astrology, alchemy and magic. In the Hermeticum we have his teaching in the form of mystic visions, He has been equated with the Greek god Hermes, and the Egyptian god Thoth or Tehuti, but the Hermeticum portrays a divinely inspired teacher. He has also been equated with Enoch in the Bible, and Idris in the Koran. Through the Hermeticum's monotheistic teachings, the Harranians where able to claim themselves as one of the "People" of the book, though Sabian might have actually referred more to the Mandaians of Iraq, who are followers of John the Baptist.

Ruins of the Harran University destroyed in 1251

Seven years after the conquest of Constantinople in 1460, the ruler of Florence, Cosimo de' Medici obtained a rare manuscript. This was but one of many that made its way to the West from Byzantium after its fall. Medici immediately told Marsilio Ficino to delay his translation of Plato and to begin translating this new manuscript without delay. This manuscript was the Corpus Hermeticum, which may have been passed into Byzantine hands from Harran. The work had wide influence. There was even a suggestion that it should be placed into the Bible. However, eventually the interest died down when it was claimed that the Hermeticum, which was written in Greek, was a recent work influenced by Christianity and Neo-Platonism. However this did not stop the spread of various Hermetic movements. Today, with the discovery of a Hermetic text in Nag Hamada, scholarship is confirming an Egyptian root for the Corpus Hermeticum.

It is interesting that Hermeticism as a cult of knowledge was upheld in Harran, which as a cultural crossroad has embodied many different scientific and spiritual enrichments. Could Harran be the last inheritor of a lost knowledge thqt at one time was spread throughout the world? It is known that the Sabians played a part in Ataturk's theory of a Solar Cult in the ancient world and it is believed to be the source of Islamic practices such as the structures ans timing of fasting and prayers. For instance, the numbers 19 and 99 which play such a prominent role in Islam are the number of years when the solar and lunar calendars coincide.
By Kemal Menemencioglu